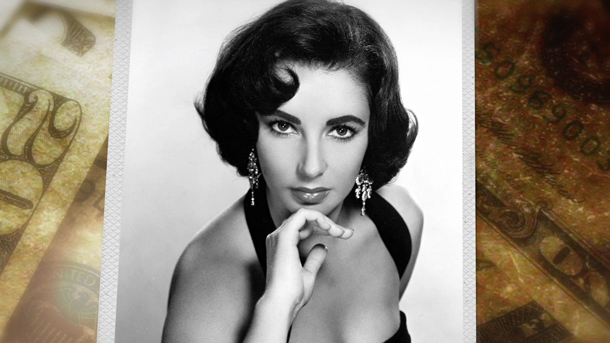 Danielle and Andy Mayoras are co-authors of Trial & Heirs: Famous Fortune Fights! and featured on-camera contributors to Celebrity Legacies.  Check out their in-depth look into the battle over Elizabeth Taylor’s estate.

Elizabeth Taylor is known for many things: her successful acting career, recognition as perhaps the ultimate icon of Hollywood glitz and glamour, standing up as a champion for AIDS research, her popular perfume, and, of course, her string of failed marriages.

Failed nuptials aside, almost everything Liz Taylor touched turned to gold.  But what about her estate?  Did she prepare her estate with the same high standards as the rest of her life?

Despite early reports that Taylor’s family may fight over her estate, her estate has been just the opposite:  peaceful.  No probate filing, no copies of her will or trust published on the web, and no court battles.

In fact, almost four years after her death at the age of 79, very little is publicly known about Elizabeth Taylor’s estate.  We do know that she created the Elizabeth Taylor Trust and funded it with her assets (including her publicity rights, including the power to manage her name, likeness and image).

We also know that her last ex-husband, number eight Larry Fortensky, inherited about $800,000, but that is only because he told the Daily Mail that in an interview.  There are also unverified reports that Taylor’s Trust left most of her assets to her children, grandchildren, and charities (including AIDS research foundations), but the document itself has never been made public.

Why so much secrecy?  Wills are public record, and have to be filed with the probate court, which means that everyone can read them.  Properly-funded revocable living trusts, however, operate outside the probate system and remain private.  Even better, well-drafted trusts are much less costly to administer, usually without the need for court oversight.

We do know that Elizabeth Taylor’s estate included a great deal of wealth — estimated to be about one billion dollars!  This number can’t be fully verified, but it is in line with prior estimates.  In 1996, for example, when Taylor divorced Fortensky, her wealth was pegged at more than $600 million.  The New York Post reported that, during the 90’s, Taylor earned about two dollars every second … adding up to a tidy $63 million per year.

The biggest reason for this financial success?  Not her acting royalties and image rights, but her perfume.  As the first celebrity to launch her own fragrance, in 1987, Taylor had a huge head start on the field, raking in a reported $100 million by 1991.  Since then, the Liz Taylor collection of fragrances sold more than one billion dollars, worldwide.

And of course, who can forget about her jewelry?  Most of her jewelry was auctioned by Christie’s in New York in December of 2011, bringing in more than $137 million.

What a great lesson in good estate planning!  Liz lived through eight marriages, which produced four children, ten grandchildren, and four great-grandchildren.  Despite assets in the billion-dollar range — a substantial portion of which earmarked for AIDS and other charities — no one has gone to court to fight over Elizabeth Taylor’s estate.

Compare that to the list of contentious celebrity estates that topped the news headlines in 2014 alone.  Taylor obviously had better luck in choosing estate planning attorneys than she did husbands!

Revocable living trusts are not just for the wealthy.  They are for anyone who wants his or her heirs to avoid probate court — which is both expensive and stressful — and to decrease the chances of a family inheritance fight.  Quality estate planning attorneys can usually prepare trusts for a modest amount, costing much less than the amount of legal fees and court costs an estate incurs when it passes through probate court.

Why not treat your heirs with the same gold standard as Elizabeth Taylor?