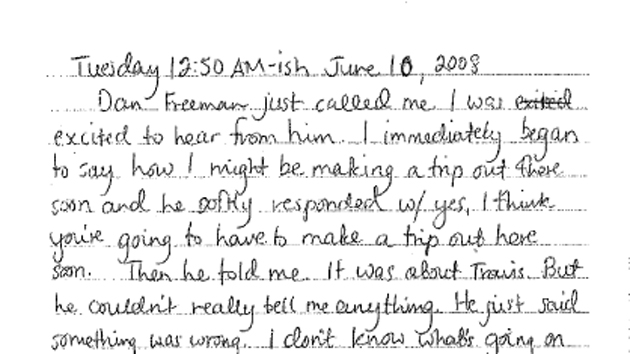 During Jodi Arias’ long and sensational trial, her personal journals were admitted into evidence and read aloud to the court.  They were used to catch her in lies and determine her character. Below you can read her bizarre feigned entries written days after she killed Travis Alexander. 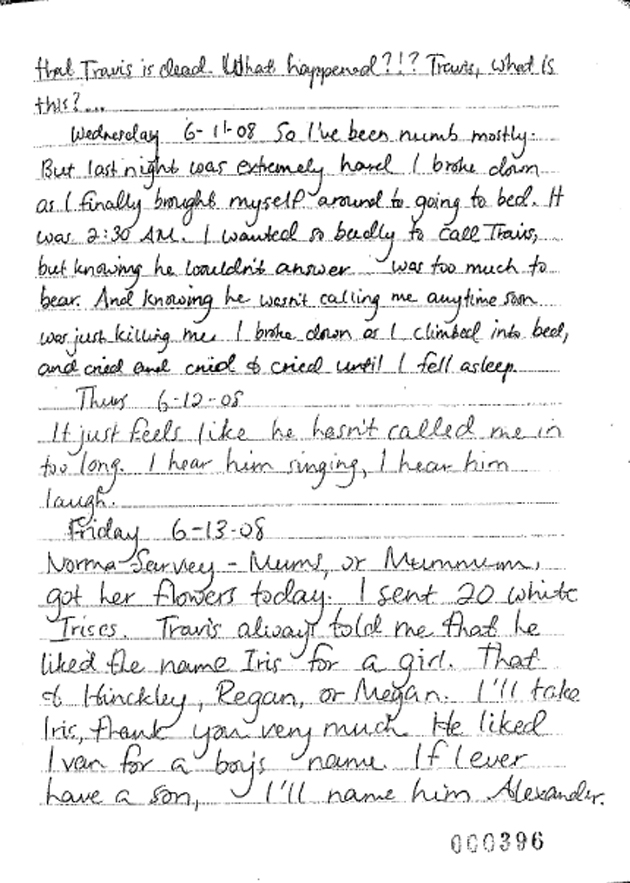 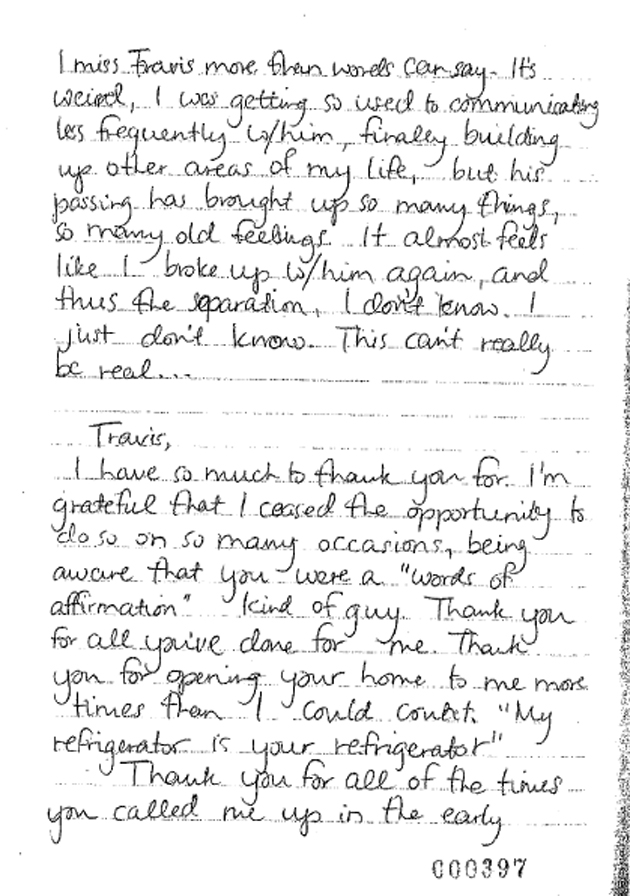 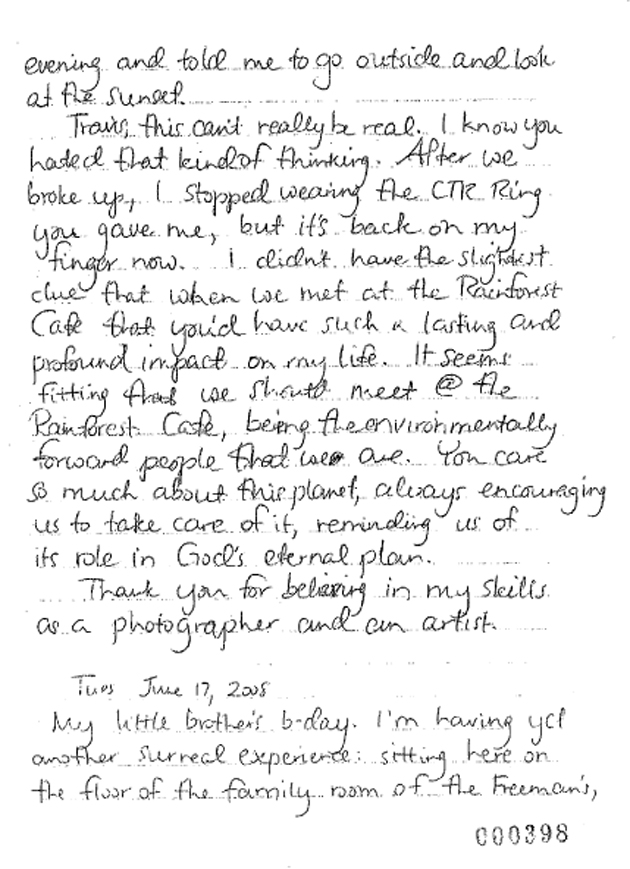 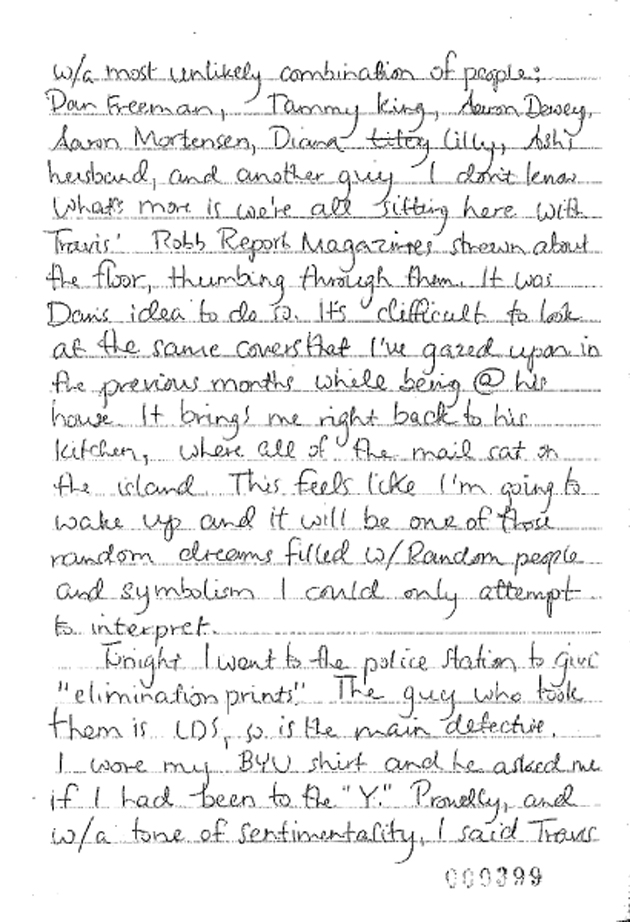 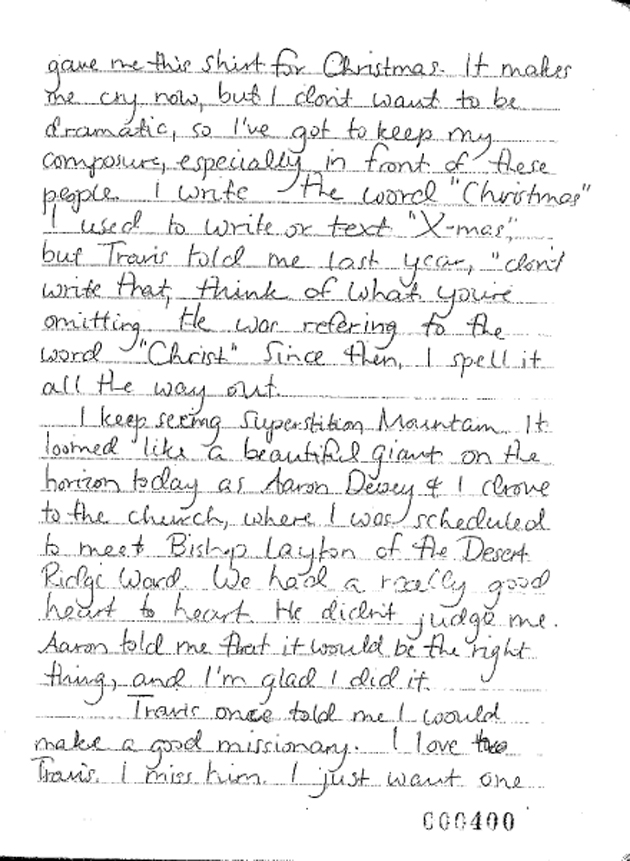 Tuesday 12:50 AM-ish June 10, 2008
Dan Freeman just called me I was excited to hear from him.  I immediately began to say how I might be making a trip out there soon and he softly responded w/ yes, I think you’re going to have to make a trip out here soon.  Then he told me it was about Travis.  But he couldn’t really tell me anything.  He just said something was wrong.  I don’t know what’s going on and I need some answers.  I’m praying that there has been a mistake.  I tried calling his phones.  Nothing, for the first time I’ve called, his voicemail box was full.  For some reason Disneyland keeps flashing in my mind.  At night.  Maybe because that’s the last time we were there.  I called Brint Haitt’s number over & over. Nothing.  I’m going crazy and I feel helpless being all the way here in CA.

Tuesday 3AM June 10, 2008
This is horrendous.  The most awful thing I’ve ever had to deal with.  I am in total shock right now.  It hasn’t fully hit me.  This can’t really be real.  This just can’t be happening.  I spoke w/ Bishop Layton.  He confirmed  that Travis is dead. What happened?!?  Travis, what is this?…

Wednesday 6-11-08
So I’ve been numb mostly.  But last night was extremely hard I broke down as I finally brought myself around to going to bed.  It was 2:30 AM.  I wanted so badly to call Travis, but knowing he wouldn’t answer was too much to bear.  And knowing he wasn’t calling me anytime soon was just killing me.  I broke down as I climbed into bed, and cried and cried & cried until I fell asleep.

Friday 6-13-08
Norma Servey-Mums, or Mummim, got her flowers today.  I sent 20 white Irises.  Travis always told me that he liked the name Iris for a girl.  That & Hinckley, Regan, or Megan.  I’ll take Iris, thank you very much.  He liked Ivan for a boy’s name.  If I every have a son, I’ll name him Alexander.  I miss Travis more then words can say.  It’s weird, I was getting so used to communicating less frequently w/ him, finally building up other areas of my life, but his passing has brought up so many things, so many old feelings it almost feels like I broke up w/ him again, and thus the separation, I don’t know.  I just don’t know.  This can’t really be real…

Travis,
I have so much to thank you for.  I’m grateful that I ceased the opportunity to do so on so many occasions, being aware that you were a “words of affirmation” kind of guy.  Thank you for all you’ve done for me.  Thank you for opening your home to me more times than I could count.  “My refrigerator is your refrigerator”
Thank you for all of the times you called me up in the early evening and told me to go outside and look at the sunset.
Travis, this can’t really be real.  I know you hated that kind of thinking.  After we broke up, I stopped wearing the CTR Ring you game me, but it’s back on my finger now.  I didn’t have the slightest clue that when we met at the Rainforest Cafe that you’d have such a lasting and profound impact on my life.  It seems fitting that we should meet @ the Rainforest Cafe, being the environmentally forward people that we are.  You care so much about the planet, always encouraging us to take care of it, reminding us of its role in God’s eternal plan.
Thank you for believing in my skills as a photographer and an artist.

Tues June 17, 2008
My little brother’s b-day.  I’m having yet another surreal experience: sitting here on the floor of the family room of the Freeman’s, w/ a most unlikely combination of people; Dan Freeman, Tammy King, Aaron Dewey, Aaron Mortensen, Diana Lilly, Ash’s husband, and another guy I don’t know.  What’s more is we’re all sitting here with Travis’ Robb Report Magazines strewn about the floor, thumbing through them.  It was Dan’s idea to do so.  It’s difficult to look at the same covers that I’ve gazed upon in the previous months while being @ his house.  It brings me right back to his kitchen, where all of the mail sat on the island.  This feels like I’m going to wake up and it will be one of those random dreams filled w/ Random people and symbolism I could only attempt to interpret.
Tonight I went to the police station to give “elimination prints”  The guy who took them is LDS, so is the main detective.  I wore my BYU shirt and he asked me if I had been to the “Y.”  Proudly, and w/ a tone of sentimentality, I said Travis gave me this shirt for Christmas.  It makes me cry now, but I don’t want to be dramatic, so I’ve got to keep my composure, especially in front of these people.  I write the word “Christmas” I used to write or text “X-mas” but Travis told me last year, “don’t write that, think of what you’re omitting.”  He was refering to the word “Christ” Since then, I spell it all the way out.
I keep seeing Superstition Mountain.  It loomed like a beautiful giant on the horizon today as Aaron Dewey & I drove to the church, where I was scheduled to meet Bishop Layton of the Desert Ridge Ward.  We had a really good heart to heart.  He didn’t judge me.  Aaron told me that it would be the right thing, and I’m glad I did it.
Travis once told me I would make a good missionary.  I love Travis.  I miss him.  I just want one…